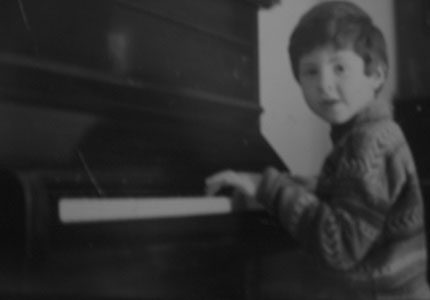 A Life for the Music

Pasquale De Rosa was born in Vico Equense, in the province of Naples, Italy on March 10, 1977.

Driven by his passion, and love for music from his father, Pasquale began his piano lessons at the early age of four, during which time he also learned to read music.

At nine years of age he joined the prestigious music school Liceo Bellini located in the city of Naples. There he continued his lessons and study of classical music.

At the age of thirteen he held his first piano concert where he performed before an attentive audience interpreting Mozart's Don Giovanni. Pasquale met with great acclaim from the public, who were impressed by his great personality demonstrated in his interpretation of Mozart's music.

While going forward with the advanced study of classical harmony he approached pop and blues music and joined a blues band at the age of sixteen, playing the piano and Hammond Organ. He participated in many festivals and performed in clubs. Pasquale was noticed for his lively improvisations based on blues phrasing that perfects imitating and he continued studying the tenacious work of pianists Ray Charles, Jimmy Witherspoon and organist Jon Lord. Musical improvisation is the expression that best identifies Pasquale.

He continued to focus his studies with Maestro Francesco Nastro, and approached jazz music by attending the Bourbon Street School in which he perfected improvisation, harmony, the composition and interplay. Also, he continued intensive courses in jazz harmony with the master Michele Di Martino.

Pasquale’s playing is a heterogeneous mixture and at the same time his touch is powerful and romantic. He also references in his playing the blues that he perfected during his years studying pianists such as Oscar Peterson, Kenny Barron, Herbie Hancock, Keith Jarrett, and Errol Garner.

Among his compositions that have proved most popular include In My Mind, which finds us in a musical environment ballad from the poetic atmosphere and persuasive. We still remember his other compositions of Latin passion and bossa nova, such as Octopus and A Night in Positano. He also continues with his exploration of musical compositions with character and funk hard bop, such as Funk for Sabine and Springtime Memories. Pasquale also explores the modern with The Children Song, Pony 's Dream, Kay 's Smile, Introspection, Pink Paint'voice, Chris's Song, Big Bluff, and being inspired by the legendary Thelonius Monk, his original composition titled LB Blues.

To date, cooperating with famous Italian musicians, he is a composer, arranger and music teacher.